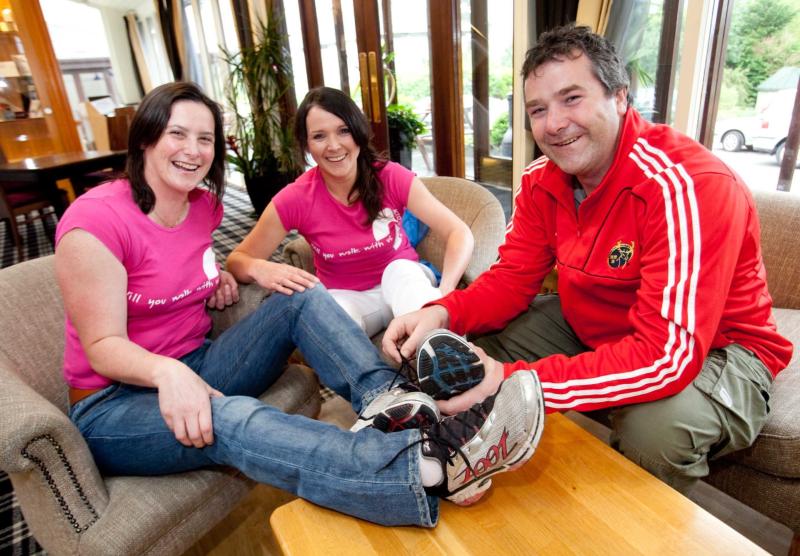 The late, great Anthony Foley with his sisters Orla and Rosie

THE SISTER of one of Munster's best rugby players, lost too soon, has raised thousands of euro for charities across the region.

The local community and rugby world was plunged into darkness in October 2016 when Anthony Foley, who enjoyed a legendary career in the red of Munster and green of Ireland, died whilst on a European trip with the province to France.

Nobody felt the grief more than his loving family and his younger sister Orla, greatly supported by her extended family and Sister Rosie.

Although they have fundraised widely since his untimely passing, during the Covid-19 pandemic, Orla stepped up her efforts by tackling more than 3,000 kilometres of Ireland's coastline on bike - raising money in the process.

Orla’s Wildways, a fundraiser to gather much needed finance for Childrens Rights and You (Cry), Children at Risk in Ireland (Cari) and the Mid-Western Cancer Foundation.

Most weekends, she headed off some part of the route until she had covered from Kinsale in Cork to Muff in Co Donegal.

To date, Orla's Wildways has raised almost €10,000 to aid the work of the charities.

Orla says: "I feel privileged to be able to raise money for these wonderful charities, all of whom are doing sterling work for people in their communities. The saddest thing imaginable in my life was the untimely passing of my big brother, Anthony Foley. However, out of this darkness, a seed of life and hope has emerged, in the form of Orla’s Wildways and a new and beautiful anthem in Anthony’s memory, “Alone You Stand”, penned and sung by his good friend and teammate, Barry Murphy, the proceeds of which will go towards these three charities."

“All the proceeds from “Alone You Stand” have been kindly donated by Barry Murphy to ‘Orla’s Wildways’ and will continue to support the great work being done on the ground by these charities to ease suffering”.

“The journey along the Wild Atlantic Way was so amazing and enjoyable – and cathartic - it was magical beyond all expectations. As if that wasn’t enough, hearing Barry deliver his final edit of “Alone You Stand” and having it donated to the fundraiser simply made my heart sing. It’s magic. No doubt it’s Anthony still pulling strings albeit on a higher pitch!”

Orla added: "I am steeped in rugby; Thomond Park is my church and Lansdowne Road is my cathedral. Even my very beginnings were affected by rugby as apparently I decided to arrive early. Dad was away on international duty against Wales and my poor mum had to drive herself eleven country miles to the maternity hospital. My first visit to the cathedral was the Ireland v Wales game in 1988, watching my big brother Anthony. My big sister Rosie has since donned the green jersey and followed in our Dad’s footsteps."