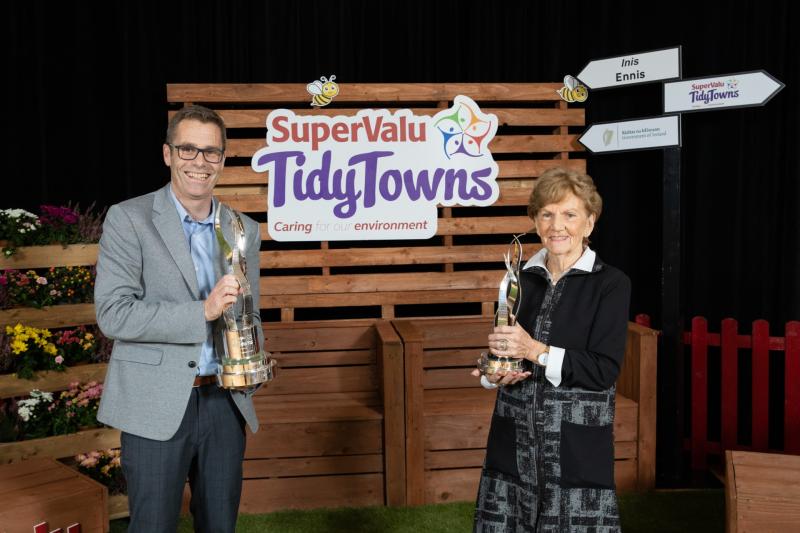 The Cathaoirleach of Clare County Council, Cllr PJ Ryan, and the Mayor of Ennis Municipal District, Cllr Ann Norton, have welcomed the news that Ennis has been named Ireland’s Tidiest Town 2021 and commended all those involved in achieving the prestigious accolade.

Ennis was judged to be the best from 847 entries to the SuperValu TidyTowns competition, which has been in existence since 1958. Ennis first entered the competition in 1959 and has won the competition on one occasion previously, in 2005.

Cathaoirleach of Clare County Council, Cllr PJ Ryan, said the award reflects the collaborative approach taken by the local community and business sectors in Ennis, and said the local authority is delighted to partner with Clare’s community groups: “I want to acknowledge the year-round work that is done by Ennis Tidy Towns and commend them on achieving this national award. I am delighted to see their hard work being recognised. There is always huge competition in the Tidy Towns and it is no mean feat to take the top honour. I also would like to commend the other Clare towns and villages that were recognised this year. These successes are a source of great pride for our county.”

Mayor of Ennis Municipal District, Cllr Ann Norton, praised the work of the Ennis Tidy Towns Committee: “I want to acknowledge the positive work of the Ennis Tidy Towns Committee and volunteers in helping to make Ennis a great place to live, work and visit. There is a huge amount of work that goes into maintaining such a high standard of cleanliness in our town. The community spirit and pride of place in Ennis is reflected in this achievement.”

“The local authority is committed to working with community groups like the Tidy Towns to enhance our environment and make it a safe, clean and greener place for all to enjoy.”

Carmel Kirby, Director of Physical Development, Clare County Council, said: “This award is fantastic news for our town and our county. In commending Ennis Tidy Towns I also want to thank the staff of Clare County Council, including Ennis Municipal District and the Environment and Gardening sections, who work to ensure our county stays clean and attractive. The close relationship between Ennis Tidy Towns and these departments, who work on many initiatives together, ensures that our town environment is protected and attractive for locals and visitors to enjoy.

“The Tidy Towns Adjudication Report referenced the Ennis Public Realm Parnell Street Laneways & Bow-ways project, stating that ‘the Lanes & Bows regeneration will have huge impact on your streetscape’. Clare County Council will continue to play a significant role in ensuring our urban spaces are rejuvenated but cannot do this in isolation. Community groups like Ennis Tidy Towns reimagine these spaces and bring them to life.”

Dr Kirby said that the approach to biodiversity in Ennis is evidence of the co-operative spirit in the town between Ennis Tidy Towns and the Gardening section and this was acknowledged by the adjudicator who said they ‘admired wildflowers in the no-mow areas and the pollinator-friendly planting at several locations in and around Ennis’.”

There were other successes for County Clare at this year’s TidyTowns competition, including a Gold Medal award for Kilrush and Bronze Medals for Ballyvaughan and Ballynacally. There was an Endeavour Award for Cree, which recorded a 6.75% increase on its score from 2019, while the RIAI Shopfront Award went to Ennistymon.

The SuperValu TidyTowns competition is organised by the Department of Rural and Community Development. SuperValu have sponsored the competition since 1991.