MORE than 2,600 students from across Limerick have received their Leaving Certificate results.

Due to the Covid-19 pandemic, and the rise of modern technology, emotional scenes at the school gates were non-existent this year, as the results were communicated through the internet.​

Also different this year was the way the exams were carried out, with students having the choice of sitting written exams, opting for accredited grades, or a mix of both. Most opted to mix the forms of assessment, which allows students to receive the better of the two grades.

Castletroy College principal Padraig Flanagan - who had 200 students completing the Leaving Certificate - believes the way it was administered this year was “kinder” to students, and thinks it should be looked at again in future.

"It’s an incredibly challenging exam which attracts so much interest, and it’s a harsh judgment which doesn’t suit very many students, and while we won’t have a repeat of structure this year, it’s certainly raised the profile of changing how we measure our young people after six years in second level,” he said.

The principal added: “It’s fair to say we have a significant number of students who have got top results. But that’s only just one measurement of success, and we are getting intense satisfaction around analysing the achievements of students who didn’t find the going that easy, particularly in the current climate.”

One person celebrating was 19-year-old Cian Mulkern from Annacotty, who received 601 points, and plans to study physics at NUI Galway.

“Covid-19 has brought its own challenges to everyone, you just have to do your own bit and keep going. It was tough going in and out, but it was necessary,” he said, adding he will be partying with pals in Galway.

Conor Hanrahan from Dooradoyle had just received his results at the campus when he spoke to the Leader.

“I’m 20 now and I went back when I was 19. I had a great year. It’s been a lot better to do it myself and take my initiative. I had wonderful support here,” said Conor, who has applied to do social studies at LCFE and hopes to start later this month.

There was no sleepless night last night for Conor who was happy he had done his best in the exams. “I was confident with how I did in the exams and the accredited grades,” he acknowledged.

The pandemic, he said, wasn’t ideal but “we made it work”.

“Covid was hard - Covid is Covid but we all managed to power through regardless. It wasn’t ideal for anyone but we made it work.”

Marcos Hernandez who resides in Ballysimon but is originally from Venezuela was also “very happy” with his results.

The political situation in his home country prompted Marcos to make the move to Ireland for a better life.

“I had to leave. I’ve settled here. I have a relative here so it was easy for me to come here to establish myself. I love it,” said Marcos, who hopes to secure a job in programming. “I am thinking of doing a maths degree at some point. The past year gave me the confidence to speak and gave me the tools to structure good sentences and communicate my ideas clearly. All the teachers here were very supportive - it was amazing,” he smiled.

Aisling Flynn who is the Leaving Cert course leader and a maths and physics teacher with Limerick and Clare Education and Training Board at the Kilmallock Road campus said the students had enjoyed “a great learning environment” over the past year.

Below: Conor Hanrahan, Hayat Abdulfeta and Marcos Hernandez were all smiles after receiving their Leaving Certificate results this morning 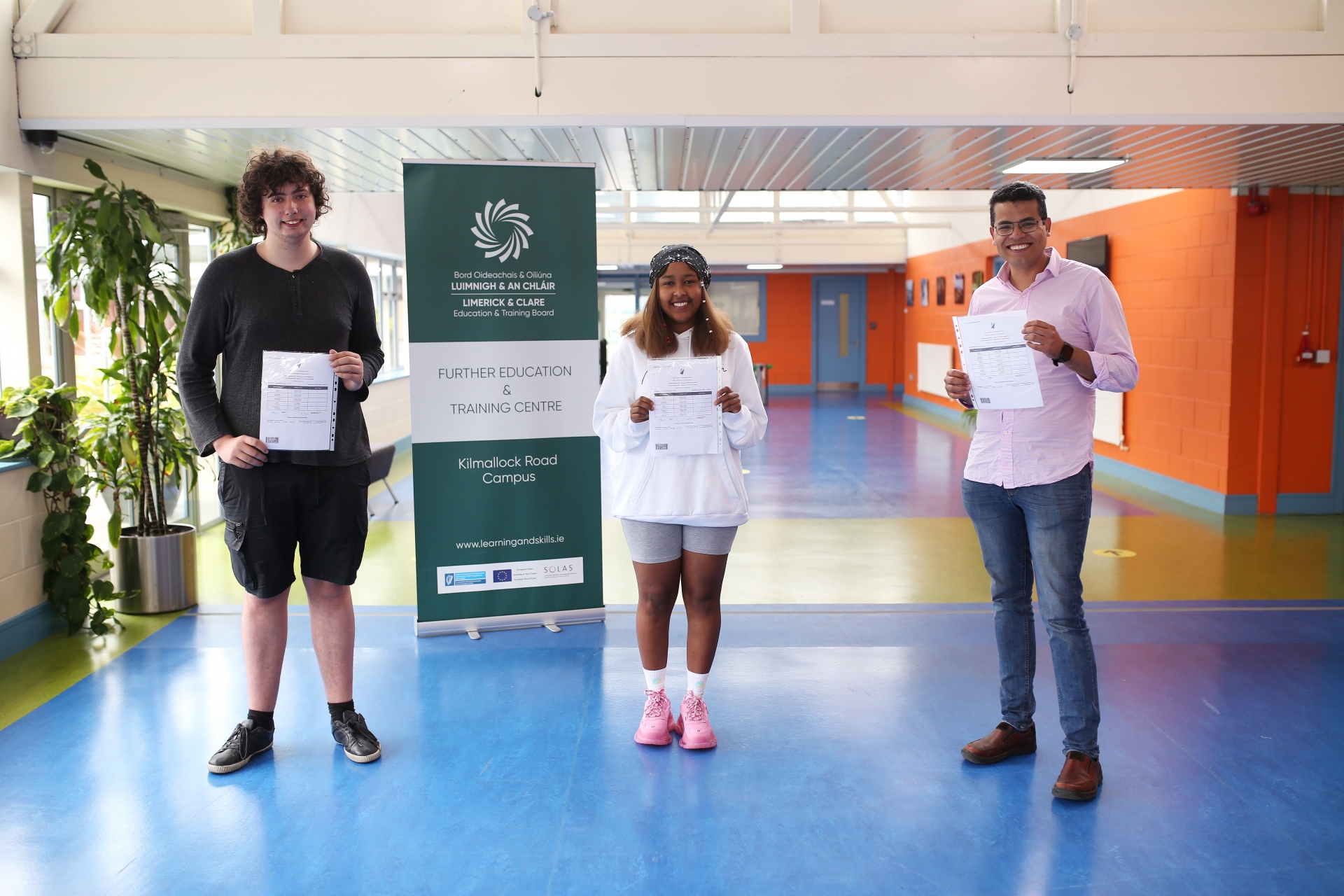 “We have everybody from early 20s up to 60s. We do the course over one year,” she explained.

“We have a wide range of subjects. We have people coming here with all different motivations. We have young adults who didn’t take the full opportunity the first time or maybe they left school early or weren’t focused at the time. They come back to get back on track. We have older learners who decide they need a change of direction. We have many recent immigrants - some of whom have very little formal education while others have had loads in their own country but they find that the Leaving Cert helps them to integrate into our systems. It is a complete mixed bag and it’s a great learning environment - everybody brings something to the classroom - it’s very much inclusive of everybody.”