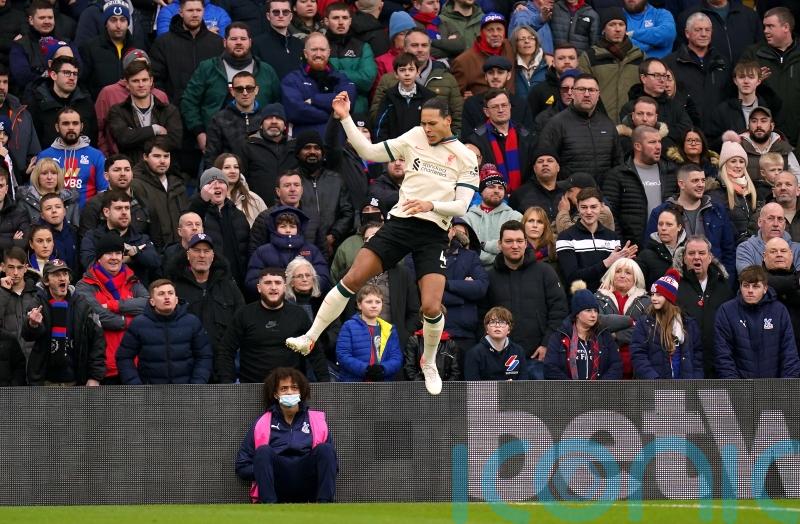 Liverpool reduced the gap at the top of the Premier League table to nine points after a 3-1 win at Crystal Palace.

Two Andrew Robertson assists helped the Reds take control, with Virgil Van Dijk and Alex Oxlade-Chamberlain on target in the first half.

But Patrick Vieira’s side reduced the deficit through Odsonne Edouard at the start of the second period.

In the end it took a string of saves from Alisson Becker to secure the win, with Fabinho adding a contentious penalty late on to wrap up a victory which keeps the title race alive after Manchester City dropped points on Saturday.

Burnley held Arsenal to a goalless draw at the Emirates Stadium on their return to Premier League action.

The Clarets have seen a host of games postponed and fell to the foot of the table as their rivals were able to fulfil fixtures.

Recent wins for fellow relegation candidates Norwich and Newcastle only heaped pressure on Burnley, but Sean Dyche’s side battled to a hard-fought point against a below-par Arsenal.

The Gunners are still without a win in 2022 as their top-four ambitions continue to falter.

Danny Welbeck grabbed a deserved point for Brighton as another Seagulls late show earned a 1-1 draw at Leicester.

The substitute levelled with just eight minutes left as the visitors again rescued a game which looked to be slipping away.

Graham Potter’s side have scored after the 80th minute in five of their last nine games to snatch points.

Patson Daka had put the Foxes ahead immediately after half-time but they failed to hang on and narrowly avoided another late collapse.