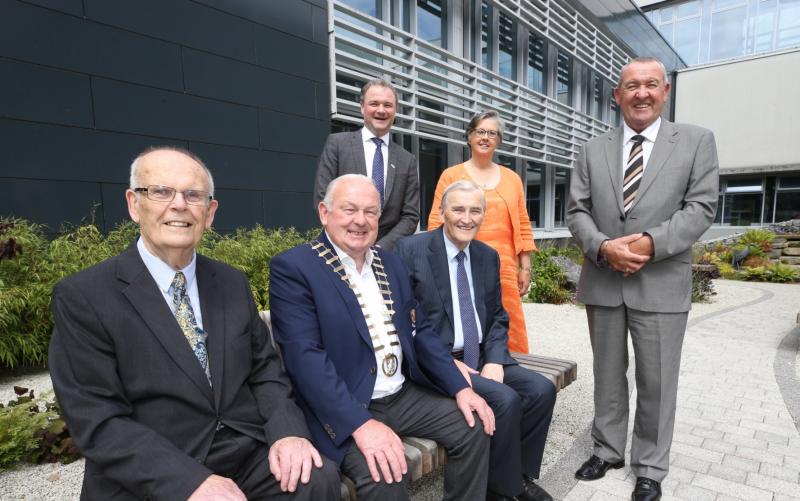 A new website dedicated to promoting awareness of one of Clare’s outstanding innovators, Brendan O’Regan, was officially launched in the Council Chamber in Áras Contae an Chláir, Ennis, Co. Clare, on Wednesday, 22nd June.

It will complement the biography, “Brendan O’Regan, Irish Innovator, Visionary and Peacemaker”, written by Brian O’Connell with Cian O’Carroll and published by Irish Academic Press in 2018.

The purpose of the new website is to provide, in digital format, comprehensive information regarding the life and ideas of Brendan O’Regan.

Brendan O’Regan’s many achievements include setting up the world’s first duty-free airport retail outlet at Shannon Airport. In economic terms, he initiated Ireland’s first programme of foreign direct investment in manufacturing, based on a favourable enterprise climate. Internationally, he is acknowledged as the father of the €70 billion a year airport duty-free business. Out of concern for world poverty, he worked closely with bodies such as the United Nations, the World Bank and Irish charity, Trócaire, in their efforts to establish export processing zones, modelled on the Shannon experience, in developing countries.

Born in Sixmilebridge in 1917, Brendan was greatly influenced by his father James O’Regan who was a local hotelier and Chairman of Clare County Council. His father encouraged Brendan to take a leadership role in public life and provided him with an understanding of the importance of business enterprise in improving social conditions while creating financial wealth. His mother Nora O’Regan (née Ryan) had a deep religious faith and concern for others, which helped to form Brendan’s character.

Brendan often said that he was ‘born into the first generation of free Irishmen’ and as such was determined to shake off a widespread national inferiority complex from a colonial era. Many of his activities took place in the 60-year period between 1938 and 1998, a time of change and improvement in Ireland. His contributions to economic, social and cultural development would help to shape modern Ireland.

Brendan generated a unique set of initiatives, including:

The official launch of the new website was hosted by Clare County Council and IDA Ireland in collaboration with the Brendan O’Regan Biography Project.

The website is interactive, enabling those seeking more information about Brendan to make contact by email with the Brendan O’Regan Biography Project team. It will also enable those who wish to contribute information to the website to do so.

The website will be of special interest to academics and students of Ireland’s economic development and those seeking successful examples in an Irish context of entrepreneurship, good management, motivation and leadership, in which Brendan’s performance was exemplary.

Speaking at the website launch, Cllr PJ Ryan, Cathaoirleach of Clare County Council, said: “Brendan O’Regan has had a unique influence – locally, regionally, nationally and internationally. His groundbreaking initiatives helped to establish Clare as a county of innovation. The ideas that he developed here in County Clare have travelled far beyond our county and our country.

“His contributions to economic, social and cultural development helped to shape modern Ireland. His vision, determination and innovation helped to establish manufacturing for export markets, and tourism from overseas markets, as pillars of the Irish economy.

“Brendan’s active, behind the scenes role in the Northern Ireland peace process showed that, as well as being an outstanding entrepreneur, he also had a deep concern for humanity.”

IDA Ireland’s Regional Business Development Manager for the Mid West Region, Will Corcoran, who attended the launch, said: “Brendan O’Regan was an early pioneer in the areas of manufacturing exports and tourism, among others, and it is great to see his initiatives, and the contribution they made, marked and remembered, both in Brian O’Connell’s biography and now with this website which will exist as testament to his innovation, passion and leadership.”

Brendan O’Regan’s daughter, Carmel, and his sons, Declan and Andrew, were guests at the website launch.

The website is just one element in a campaign to achieve wider recognition of Brendan’s role in the history of 20th-century Ireland.

Work is in hand by the Brendan O’Regan Biography Project team to create a Brendan O’Regan archive, consisting of a collection of documents, books, photographs and sound and video recordings about Brendan.

Having such an archive available for scholars and the general public would help to disseminate his story to a wider audience.

Brian O’Connell, author of the Brendan O’Regan biography, said: “The website will increase awareness of the life history and ideas of Brendan O’Regan and help achieve a deserved place for him in the history books.”

The address for the new Brendan O’Regan website is: https://brendanoregan.ie