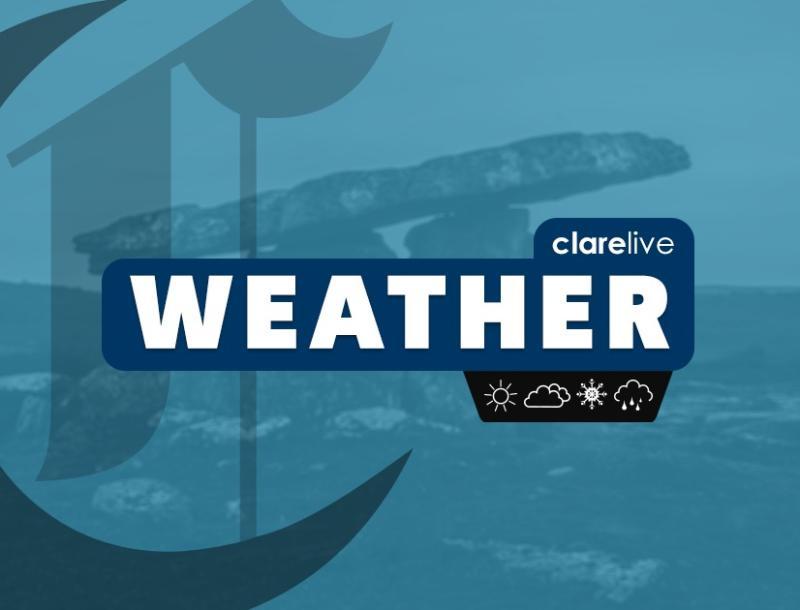 RAIN will spread northwards across Clare this morning with some heavy falls leading to localised flooding.

It will turn more showery for the afternoon, showers frequent in the west but more scattered in the east and some further heavy downpours are possible.

Winds will freshen form the southeast with the rain, then veer west increasing fresh for the afternoon, stronger on coasts. Highest afternoon temperatures of 14 to 18 degrees.

National Outlook
OVERVIEW: Unsettled and cooler, with rain and heavy showers at times.

TONIGHT: Clear spells and scattered showers at first but another spell of heavy rain will move into the southwest overnight. Lowest temperatures of 8 to 11 degrees with moderate to fresh and variable winds.

SATURDAY: Saturday will be a cloudy and wet day with spells of rain and heavy showers. Some of the showers may be thundery. Highest temperatures of 12 to 16 degrees in a moderate to fresh south to southeast wind.

SATURDAY NIGHT: Further spells of rain and showers across the country during Saturday night. Lowest temperatures of 9 to 13 degrees with light to moderate south to southeast winds.

SUNDAY: A mix of sunny spells and widespread heavy and possibly thundery showers. Highest temperatures of 13 to 17 degrees in a moderate to fresh south to southwest breeze.

SUNDAY NIGHT: A mix of clear spells and scattered showers, heaviest and most frequent in the west and northwest. Lowest temperatures of 8 to 12 degrees with light to moderate south to southwest winds.

MONDAY: Staying unsettled with widespread and heavy showers across the northern half of the country, but drier and brighter weather in the south. Highest temperatures of 13 to 17 degrees with a light to moderate southwesterly wind.