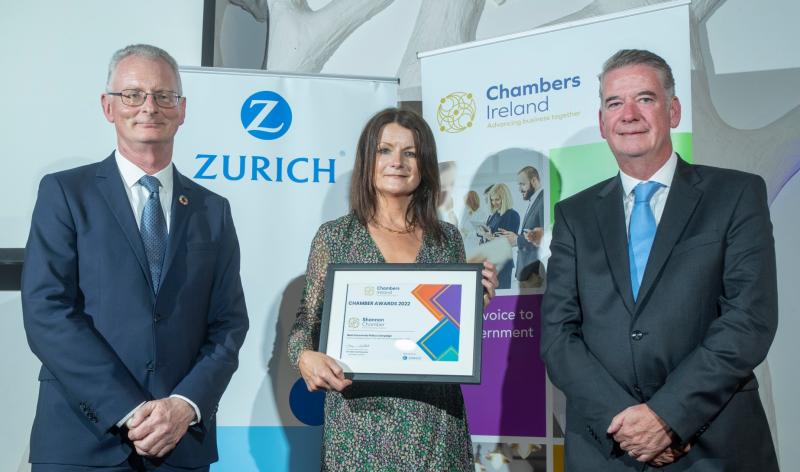 Shannon Chamber has been announced as the winner of the ‘Most Successful Policy Campaign’ category in Chambers Ireland’s Awards 2022. The awards, hosted by Chambers Ireland and sponsored by Zurich, recognise the outstanding work of chambers of commerce throughout the country in supporting local, regional, and national business. The announcement was made at the awards ceremony in Dublin.

Shannon Chamber’s entry into this category was the preparation of the business case for a multi-annual, fully funded regional air access recovery and growth action plan presented to Government. The business case was prepared by Shannon Chamber in collaboration with the Irish Hotels Federation (IHF), and supported by Ennis, Limerick, and Galway Chambers.

The objective of this policy campaign was to demonstrate that, while the funding allocated by Government to support Irish airports up to 2021 was welcome, a reform of funding strategy would be needed in the future. The collective business and hospitality representative grouping wanted the Government to consider providing three forms of sustained multi-annual funding to Shannon and other regional airports to enable them to sustain operations as they recovered from the pandemic and to ensure that critical routes to and from North America, UK, and Europe would return as soon as possible.

The financial model prepared as part of this initiative was described as innovative by elected representatives in the Mid-West and cited as a clear indication that the Chambers and the IHF wanted to present a solution to Government to aid the restoration of air connectivity to Ireland.

Commenting on this success, Shannon Chamber CEO Helen Downes said: “We are honoured to receive this award as it was a campaign that involved collaboration with both the IHF and our neighbouring chambers and pro-active engagement with our local and regional TDs, who understood the need for support of this nature at a key time for the aviation sector.

“The campaign, which ran throughout 2021, illustrated the capability of chambers to create and develop partnerships with other business groupings with a shared purpose. Stakeholders, policy makers and government ministers have provided positive feedback on the impact of the initiative. They have referenced the unity of purpose, the evidence base used to back up proposals and the willingness to listen and respond with more detail when required. This approach continues in the aviation sector and in other sectors where multi-group initiatives can produce stronger impact. Long-term impact comes from the campaign’s drive and success in establishing the principle of providing OPEX and CAPEX support to State-owned regional airports and EU state aids approval for air route development incentives. The principles have been transferred into real business impact with allocation of funding to airports in Government budgets.

“We will now turn our attention to national aviation policy and will be calling on Government to address the imbalance that currently exists in traffic levels in Irish airports. Ireland needs a more robust national aviation policy. Dublin currently has 87% of all traffic whilst the other four airports – Shannon, Cork, Kerry, and Ireland West - compete for the remaining 13%. This must be reviewed in the interest of the travelling public, and we will be giving this priority attention in the weeks and months ahead,” added Ms Downes.

The annual Chamber Awards seek to recognise the outstanding work of the Chambers Ireland network around the country. They also provide an opportunity to showcase successful event ideas, campaigns and policies that have contributed to the development of chambers and business more broadly.