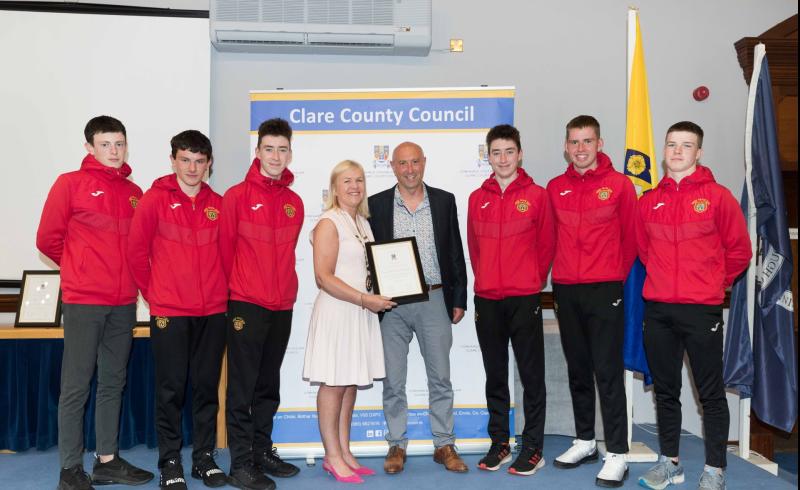 Mayor of Ennis Municipal District, Cllr Ann Norton, and members of Clare County Council hosted a Mayoral Reception to honour local groups and individuals for their outstanding achievements on 6th May, 2022, in the Civic Room of the Buttermarket Building in Drumbiggle, Ennis.
Those honoured included accomplished groups and individuals from the worlds of music and sport:

Alana McInerney, on being selected on the Irish Women’s Rugby Squad. A former student of St Flannan’s College in Ennis, Alana joined the Ennis Rugby Football Club (RFC) Under-18 Girls’ team in 2017 and was part of the Munster Under-18 Girls’ interprovincial squad a year later. She moved from Ennis RFC to UL Bohemian RFC, playing in the Energia All-Ireland League (AIL) Division 1, and was a member of the Munster Senior Women’s squad in 2020. In 2021 she was part of the Munster Women’s squad that won the Interpros. In the same year she was called in to play for the Ireland Women’s 15s squad for the Autumn Internationals. 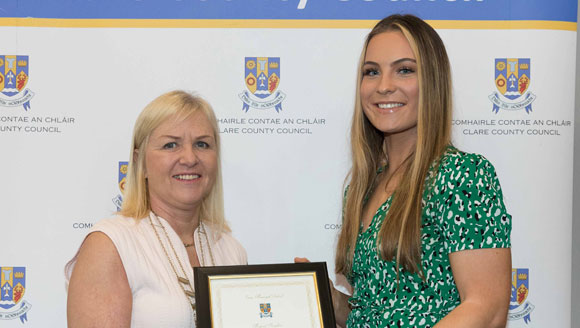 Ennis Brass Band, for entertaining the people of Ennis and Clare for 50 years. 2021 was a milestone year for Ennis Brass Band, marking the 50th anniversary of the band’s formation. The band has competed in various competitions throughout Ireland, winning several national titles and sectional awards along the way. Ennis Brass Band has performed in England, Wales, Germany, Scotland and France, and has played for distinguished guests such as President Michael D Higgins, former President Mary McAleese, Muhammad Ali and King Juan Carlos of Spain. 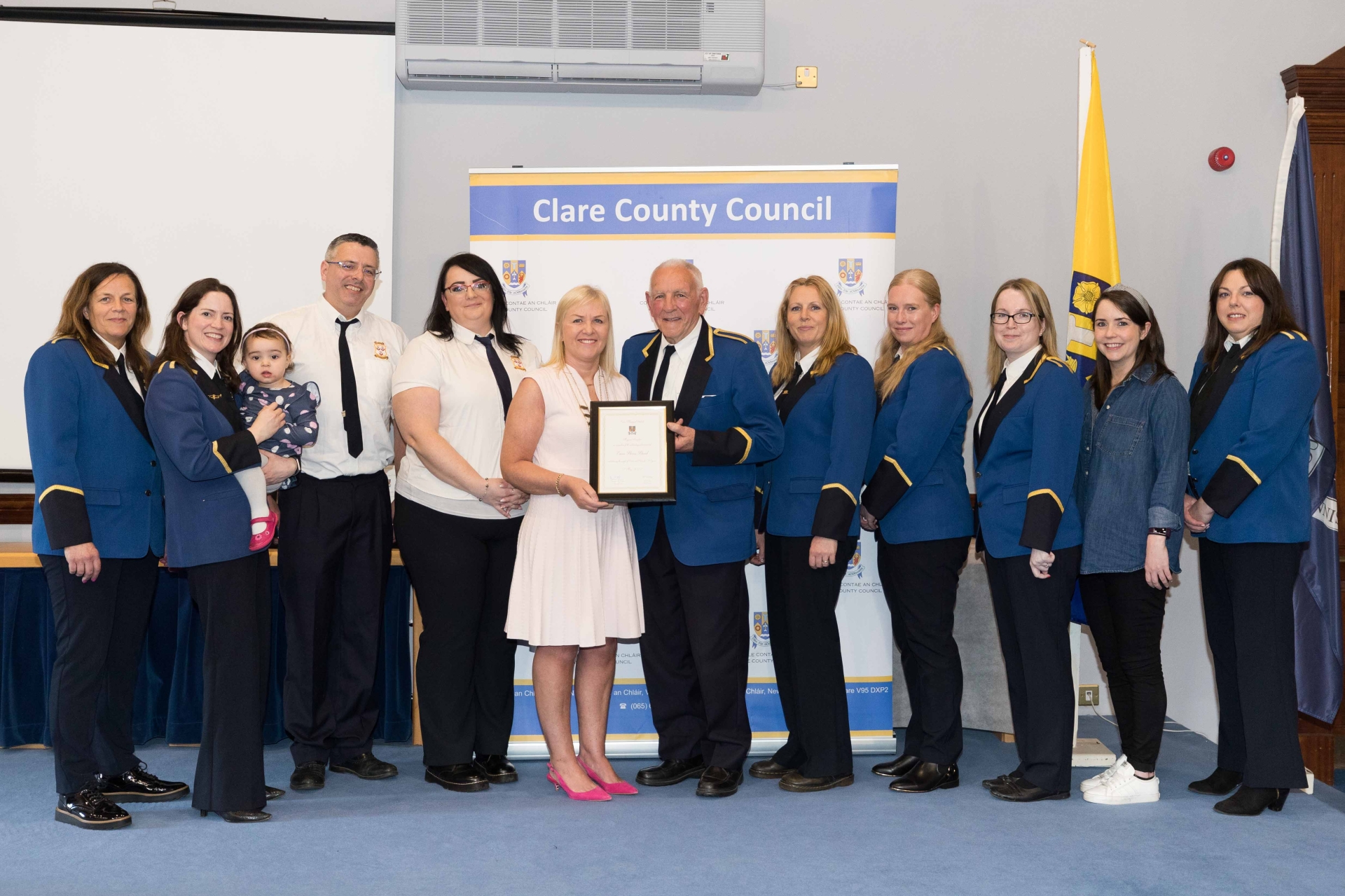 The Ennis Track Under-20s Team, on winning the 2022 Junior Men’s European Club Cross Country Championship (ECCC) title. Following their win in a highly competitive National Junior All Ireland Cross Country Championship in Santry last December, the team represented their club Ennis Track AC at the ECCC. Mark Hanrahan, Dean Casey, Dylan Casey, Niall Murphy, Cian O'Boyle, Thomas McGuire and Colin Ryan all travelled to Portugal to represent Ennis Track. Their coach Pat Hogan and his coaching team travelled with the squad. For the first time ever, they brought home the Under-20s ECCC Cup. This was the icing on the cake to wrap up the 30-year anniversary of Ennis Track AC. 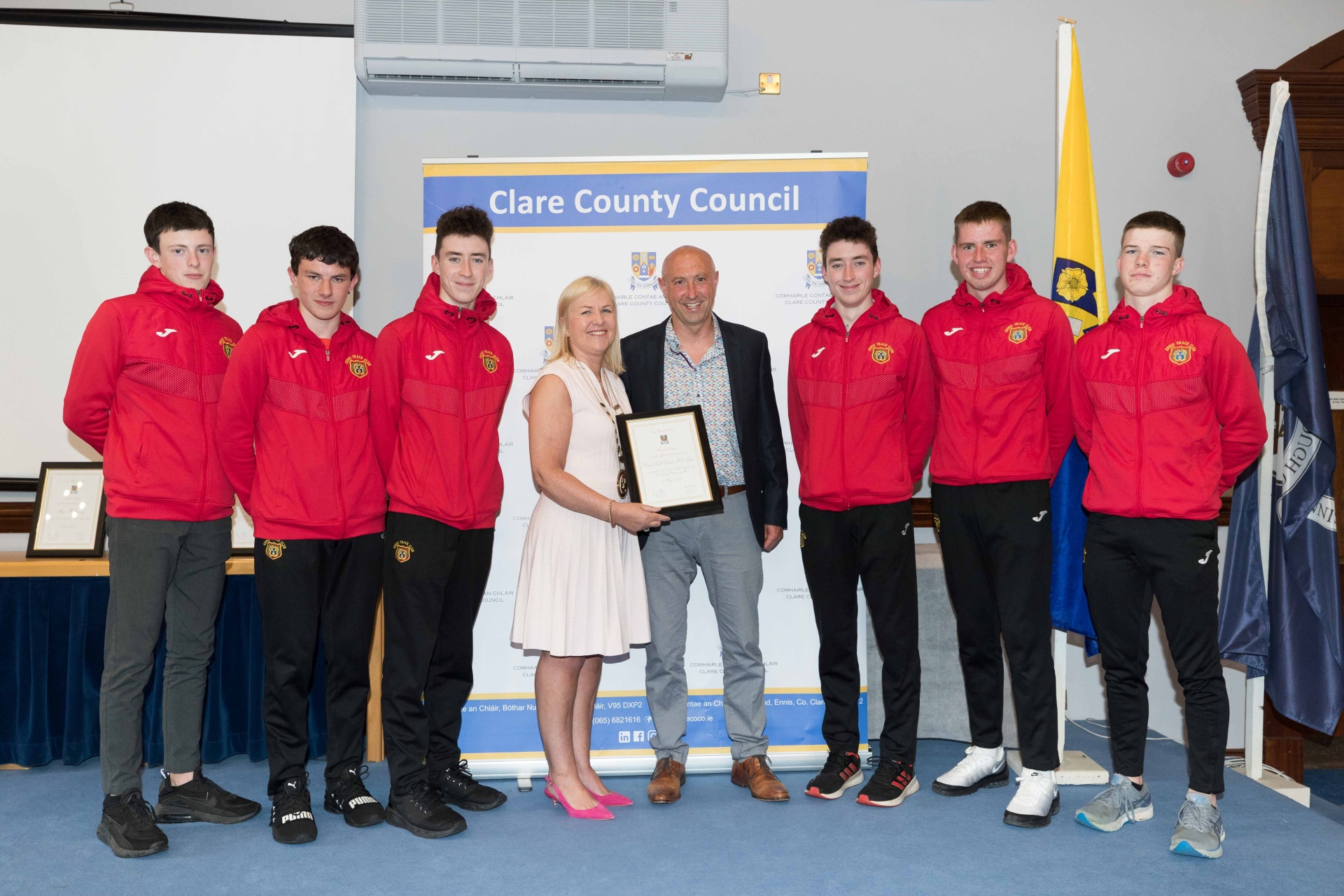 Tony Butler, Ethan Coughlan and Conor Moloney, on being selected on the Irish Rugby Team that won the 2022 Under-20 Six Nations Championship.

Tony, from Doora Barefield, began playing rugby aged 7 with Ennis Minis and continued through the age grades culminating in an 18s All-Ireland final against Tullow in 2019. Tony has represented Munster Rugby at various age grades and made his senior debut for Munster against Wasps in the Heineken Champions Cup in December 2021. He played in each of the Grand Slam winning games in the 2022 Under-20 Six Nations Championship. Tony plays senior rugby with Garryowen RFC.

Ethan, also from Doora Barefield, formed a partnership with Tony for Ennis RFC aged 11 and represented Ennis RFC successfully at every age grade thereafter. Notable rugby achievements include Under 16s and 18s titles. Ethan has represented Munster Rugby at various age grades and has captained Ireland Under-18s. Ethan played in all games in in the 2022 Under-20 Six Nations Championship, starting in the crucial win against France. Ethan represents Shannon in the All Ireland League.

Conor is from Kiladysert and began playing rugby with Ennis RFC at Under-11s. He has represented Ennis RFC at all age grades and shared success with both Tony and Ethan at 16s and 18s grade as well as representing Munster and Ireland at underage level. His Munster senior debut took place in the Heineken Champions Cup victory over Wasps in December 2021. Conor played in the crucial victory against France that culminated in Ireland being crowned Six Nations and Grand Slam winners in the 2022 Under-20 Six Nations Championship. Conor represents Young Munster in the All Ireland League.

President of Ennis RFC Dermot Hallahan accepted the certificate of achievement on behalf of Tony, Ethan and Conor. 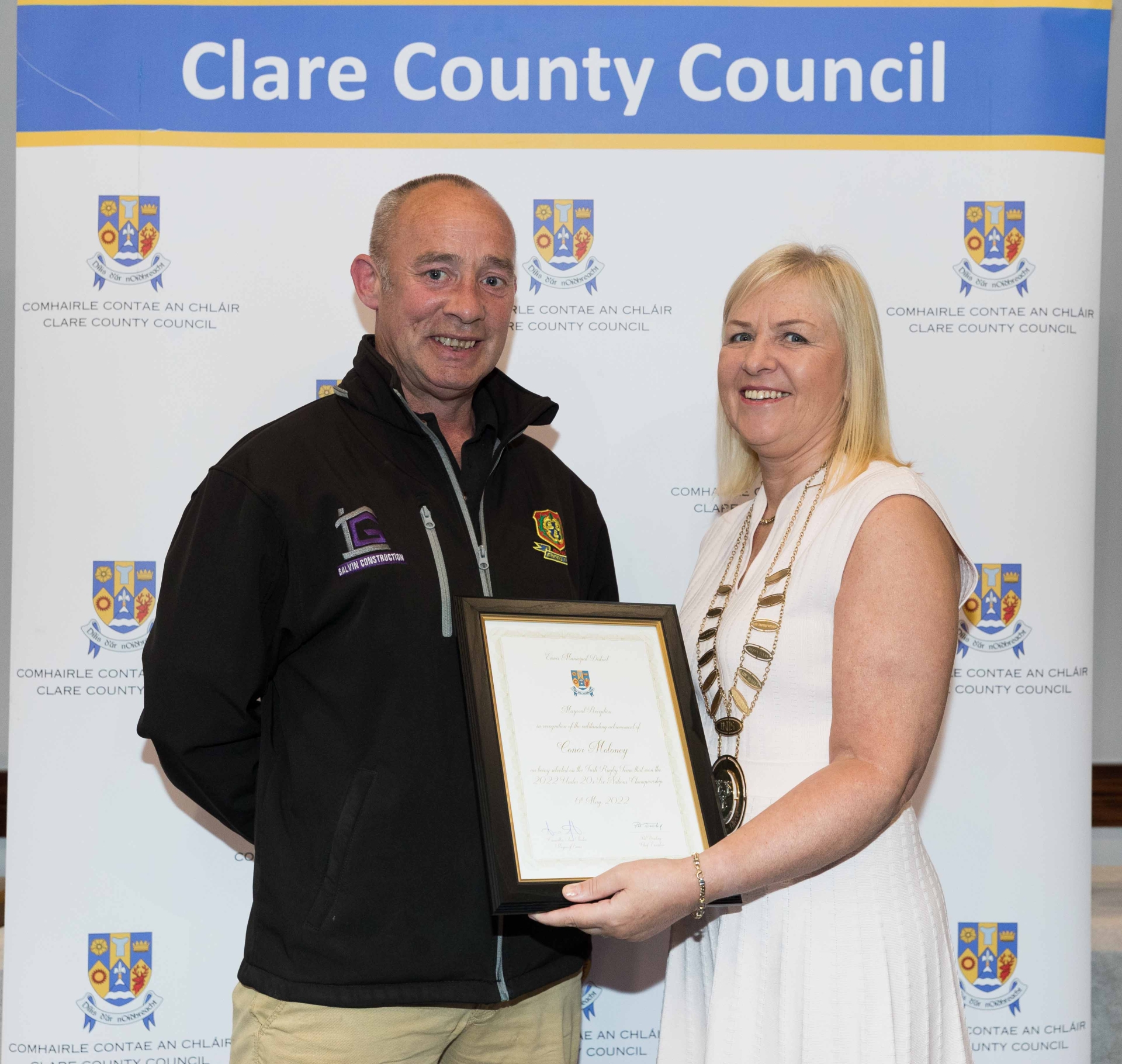 Mayor of Ennis Municipal District, Cllr Ann Norton, said: “As Mayor of Ennis MD, I am delighted to host this reception to honour those who have contributed so much to the cultural and sporting life of Ennis. We are all so proud of their progress and achievements at international level and wish them well in the future.”