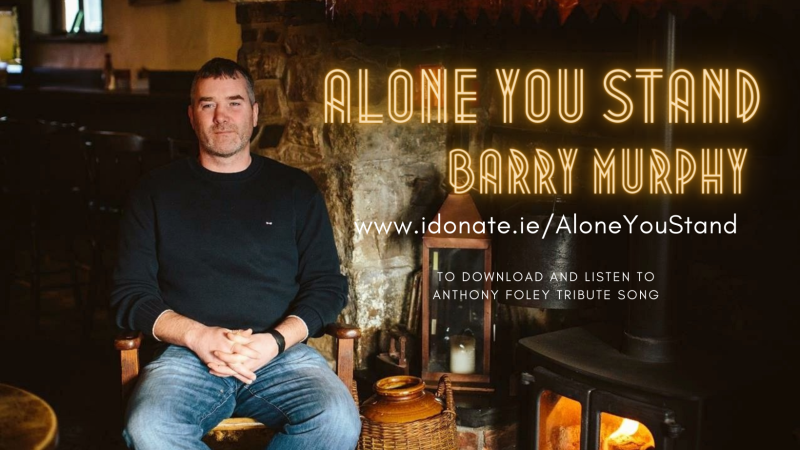 Murphy has written a tribute song and recorded it in time to coincide with the fifth anniversary of his friend, Anthony ‘Axel’ Foley’s untimely death.

Barry has kindly donated proceeds from the song to the year-long fundraiser Orla Foley has undertaken in memory of her beloved brother. Orla, over a 4-month period cycled 3000km along the Atlantic Way raising Є9000 for her fundraising initiative ‘Wildways’ where CRY Ireland (Cardiac Risk in the Young) was one of three selected causes that benefited as well as CARI and Mid -Western Cancer Foundation. So far, Barry has raised Є10,112 euro from the song as well as Є10,480 for Orla’s Wild Ways.

CRY Ireland (Cardiac Risk in the Young) is a self-supporting, Irish charity that supports families in Ireland, north and south, bereaved by the sudden cardiac death (SCD) of a loved one or those affected by inherited cardiac conditions. CRY offers access to free screening and emotional support services to those affected including their new freephone service, The CRY Helpline. CRY Ireland also supports research into the prevention of sudden cardiac death.

Lucia Ebbs, CEO of CRY said “We are truly grateful for the support from Orla Foley and Barry Murphy. Through their generosity and efforts, we can continue to offer emotional support to families, like Orla’s who have been affected by a sudden cardiac death. Donations made will be an invaluable boost to support CRY’s new Freephone helpline, which offers a listening ear to those grieving the loss of someone from sudden cardiac death or those affected by life-altering cardiac conditions.”

Orla said she has been pleasantly surprised at the groundswell of generosity she has encountered everywhere as people join her in paying tribute to her brother in a charitable way:

“It’s been a case of pushing an open door. People are only too happy to go out of their way to honour Anthony and to help raise money for these worthy charities. By doing so, they have honoured not just his family and friends but the memory of all the games Anthony played on that pitch. Staging it on the day the All Blacks are the opposition makes it a much more special occasion for us all. Dad was on the Munster Team that beat the All Blacks in 1978, Barry Murphy was on the Munster team that nearly beat the All Blacks in 2008 and the Irish Rugby Team did the very special Axel 8 after Anthony died for the historic win in Chicago in 2016.”