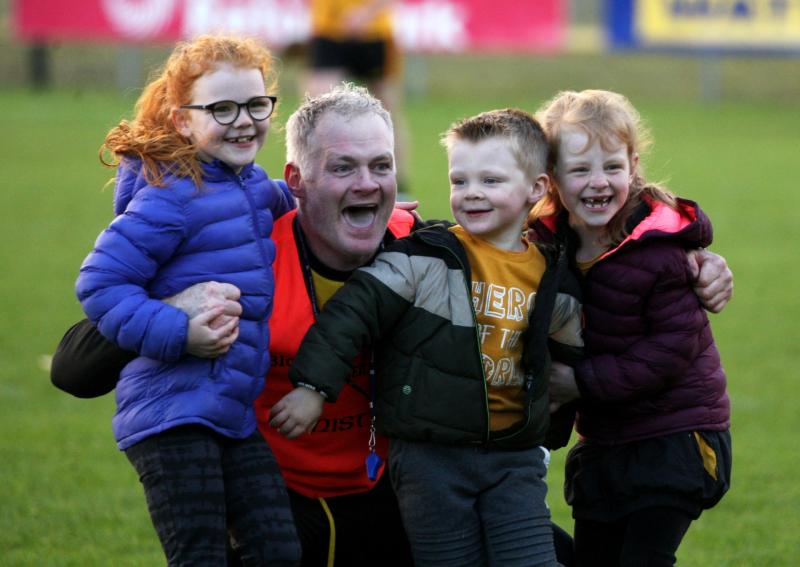 St. Eunan's team manager Eugene Organ celebrates with his children Lauren, Conor and Rachel after his team defeated Setanta in the Donegal SHC final on Saturday at O'Donnell Park

Ennistymon lost a Clare Under-21 hurling championship quarter-final and Eugene Organ made the tough decision.

It was 2001 and the bus journeys had taken their toll. A student in Letterkenny, the eight-hour trek - involving three separate buses Letterkenny-Sligo, Sligo-Galway and Galway-Ennis - was just too much.

At Ennistymon, Organ was a dual player, but when he penned the transfer papers to St Eunan’s, he never let go of the camán.

Organ was playing senior hurling until last year and played the second half of the 2020 Donegal SHC final when Setanta beat St Eunan’s 2-19 to 2-13.

When the calendar turned into 2021, Organ decided to ‘help out’ with the St Eunan’s seniors.

Each embrace seemed to heighten the meaning of it all. A 2-9 to 0-14 win over a fancied Setanta saw St Eunan’s crowned champions for the first time since 1972.

“Boys I played with were in tears,” Organ, who ended up donning the Bainisteoir bib for 2021, says.

“It does mean everything. The outpouring of emotion was something else. I just looked at the men I soldiered with. The place was packed and I could hear Colm Breathnach driving us on.

“People think ‘means everything’ is something you have to say. Well, it does.” 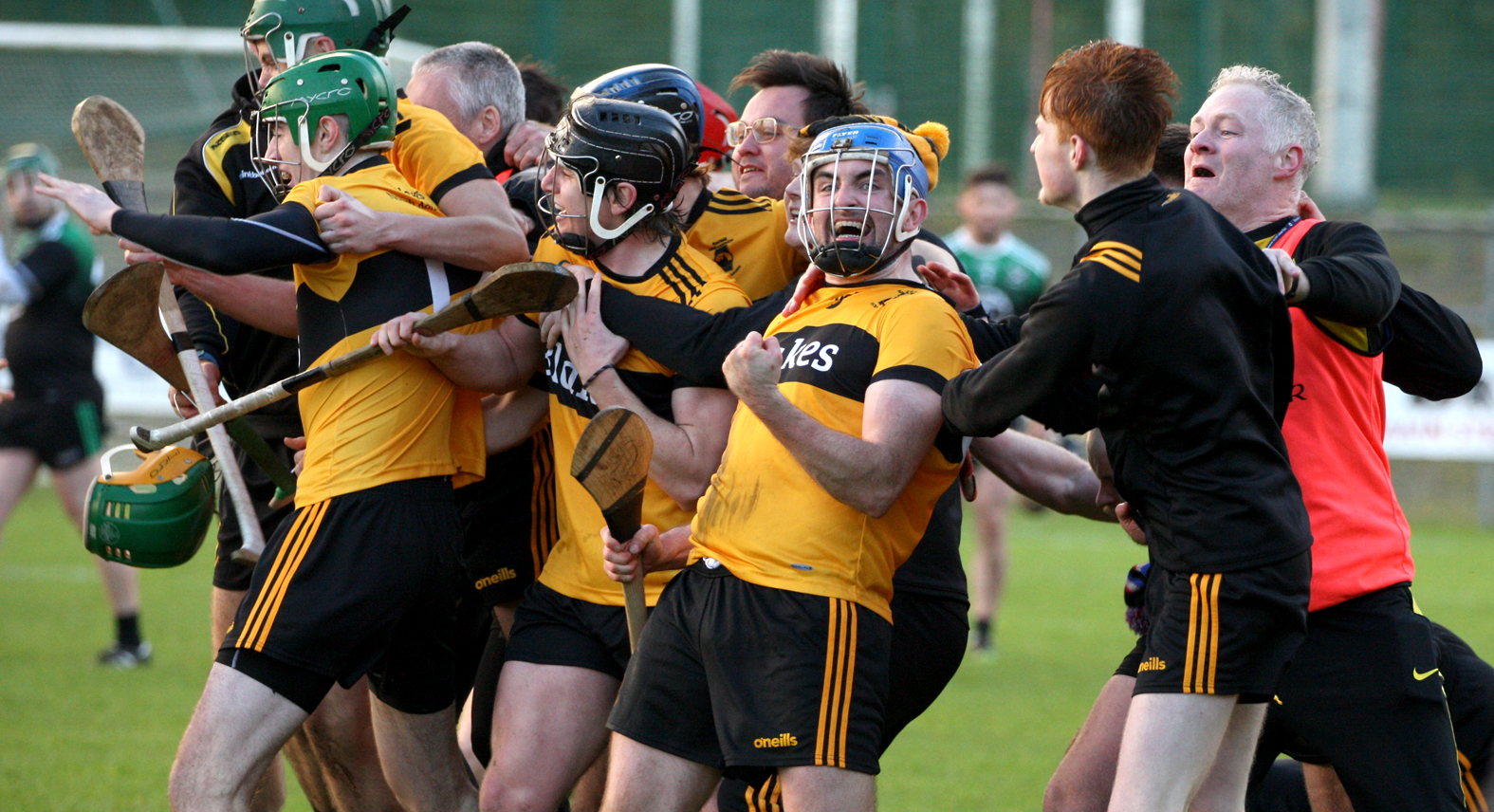 He soldiered too with Michael McGrath, ‘a real hurling man.’ In February 2018, aged just 40, Michael passed away at the Donegal Hospice. His father Pat spoke to the St Eunan’s team before the 2019 final. Michael’s memory lives on.

As the rain poured with the clock ticking on Saturday, Organ couldn’t help but think his old comrade was pulling strings somewhere.

“You gather energy and inspiration from anywhere you can. The inspiration just to look up above, those are things you never forget.”

Organ first set foot in Letterkenny in the autumn of 1998 to study computer science.

“Back when there were floppy discs,” he says.

He spent a large chunk of 2003 in America before returning to Letterkenny. He met his wife Joanne in 2004 and a year later joined An Garda Síochana, now stationed in Milford. Letterkenny is where he has made his home.

But Ennistymon is home. He makes that familiar trip - in better transport and on better roads, mind - to help his father, John, and brother, Michael, on the family farm.

He keeps beef cattle himself and checks in ‘every two or three weeks, when I can’.

SHC winners in ’72, hurling faded out of St Eunan’s by the end of that decade.

In 1996, a meeting at the Swilly Inn, called by hurling enthusiast Gabriel Flood, formalised the idea of hurling’s return at St Eunan’s.

Paddy Flood, a Dubliner based in Letterkenny for his job as an Irish and maths teacher at Raphoe Vocational School, was hurling for Burt at the time.

“A few of us who had a bit of hurling landed in Letterkenny around the same time in the mid-late 90s and it grew from there,” Paddy Flood says.

“Burt were so far ahead of everyone at the time - they could have matched any club team in the country,” Flood remembers. 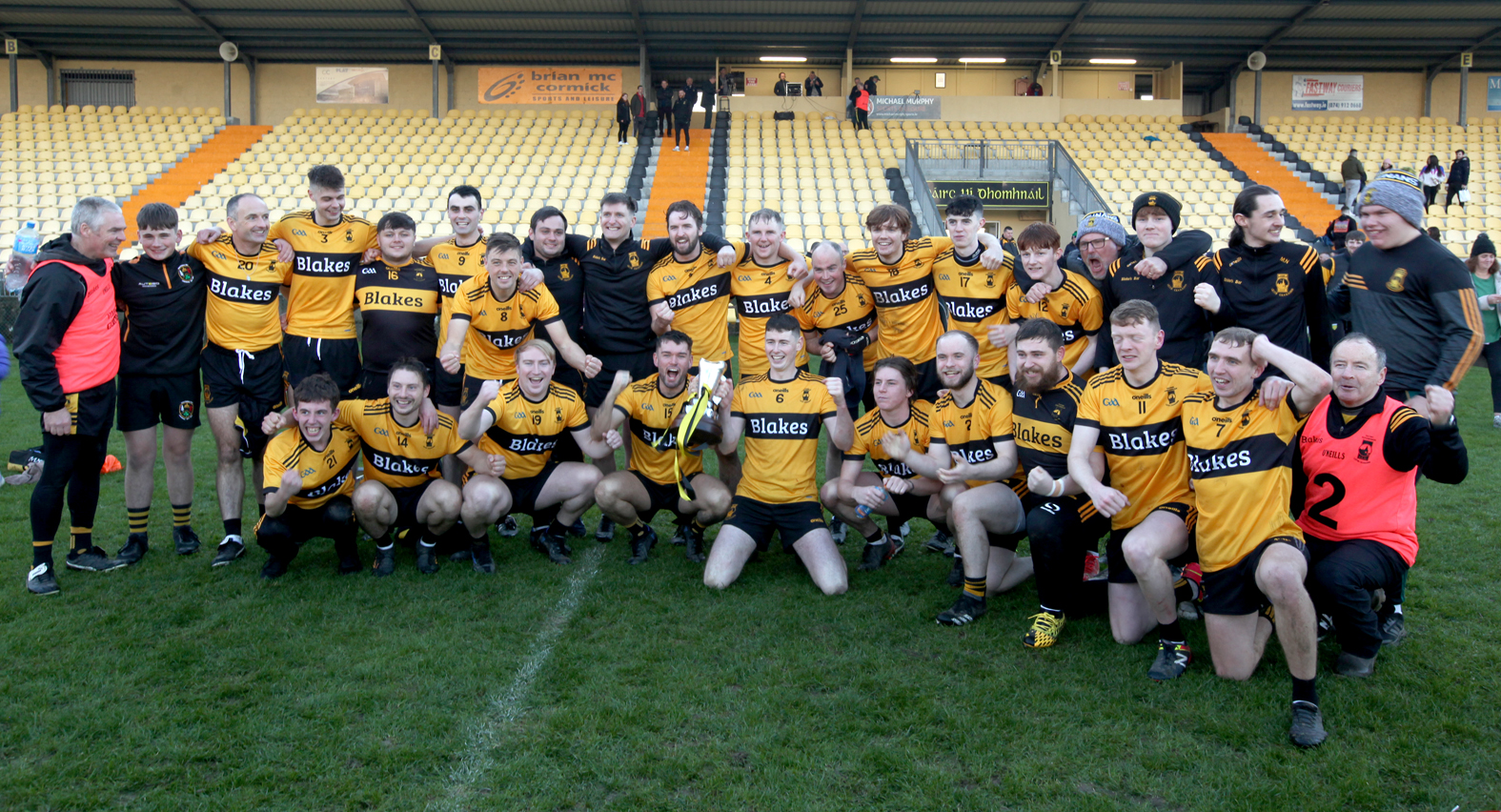 There were frustrating times, too, but the flame was kept burning by men like Denis Murphy.

A Wexford native, Murphy managed the senior team when it wasn’t all that fashionable.

“Denis was just wonderful,” says Flood who rang his former manager on Saturday night and insisted that he join the celebrations. “That team might have struggled, but it was our base.”

Murphy politely declined. “He has emigrated to Australia,” laughs Flood.

Flood beavered away with the juvenile teams and could feel the tide turning.

“We committed to keeping the senior team going in the mid-noughties because we knew what was coming.

“Sean McVeigh, who I call a club legend now, was one of the first young lads to come through and that has been the story since of young, local lads stepping up.

At the outset of 2021, Organ sensed that something was different.

“There was such a unity in the group this year,” Organ says. “We’d hear a lot of trash talk that we’d never win anything: ‘How many count titles have you?’

“There was such a unity in the group this year.”

Goals from Russell Forde and Kevin Kealy had St Eunan’s in front by the skins of their teeth down the home stretch. It was there where Organ felt his men felt the benefits of mid-season running sessions and strength and conditioning under St Eunan’s and Donegal senior footballer Caolan Ward.

“When the going got tough in the game, they could look at each other and know they did worse above at Coláiste Ailigh,” Organ says. “They did that together. They suffered together.”

The rain is teeming on a dark Tuesday in the Cathedral Town and Organ is hurried now. The St Eunan’s under-11s are preparing for a county final.

“It’s all about inspiring the next generation,” he says now. “It’s night and day to when Denis Murphy was holding it together and we scraped teams together.”

Now, thanks to men like Organ, St Eunan's have heroes to call their own.